If you want to program a new remote to the system follow the procedure below: 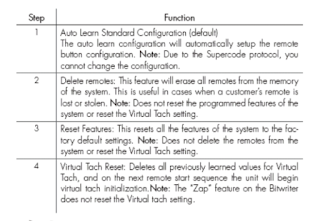 Note: You do not need to go though the setup or the other features in the menu.

After entering the setup mode on the remote, use the following lear routine to add remote controls to the system.

The learn routine may be locked if previously programmed using the Bitwriter.

II. The Valet/Program switch, plugged into the blue port, is used for programming. There is a basic sequence to remember whenever programming this unit: Key, Choose, Transmit and Release.

1. Insert the key. Turn the ignition to the On position. The heavy gauge pink wire must be connected.

2. Choose. Within 10 seconds, press and release the program switch corresponding to the number of the desired funtion step listed in the following table. Once you have selected the function step, press the switch once more and hold it. The LED flashes and the horn honks to confirm the selected functional step. Do not release the Program switch.

3. Transmit. Press the lock button on the remote control. The horn honks to confirm that the code has been successfully programmed. It is not possible to teach a remote control button to the system more than once.

4. Advance. you can advance from one function step to another by releasing the Valet/Program switch and tapping it to advance function steps and then holding it.